Home > Blog > SHARKS, YOUR PERIOD, AND YOU (QUEUE THE MUSIC) 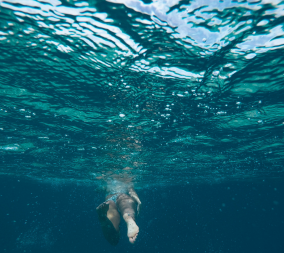 SHARKS, YOUR PERIOD, AND YOU (QUEUE THE MUSIC)

With all the shark attacks on the coast of North Carolina over the last few years, we thought it would be timely to address the question of whether or not it is safe to swim in the ocean while menstruating?

Sharks have the ability to detect minute amounts of blood and other organic material in the water. George H Burgess, Ichthyologist (fancy name for a fish expert) at the Florida Museum of Natural History states, “Menstrual blood almost certainly can be detected by a shark, and I’m sure urine can as well. Do we have positive evidence that it is a factor in shark attacks? No, and until some menstruating and non-menstruating divers volunteer to participate in a controlled test we will never prove it. In my opinion, it likely is attractive to sharks in certain situations.”  Any volunteers?

Ralph S. Collier, President, Shark Research Committee, has been documenting shark attacks for years and is a shark behavioral expert. It is his thought that “when menstruating it is better to be safe than sorry and wait until after you’re done menstruating to go into the ocean”.

H. David Baldridge conducted studies in the 60’s which involved introducing various human bodily fluids, including menstrual blood, to wild sharks who were held in ocean pens to see if any caused a feeding frenzy. Menstrual blood did not elicit a feeding frenzy.   Interestingly, peritoneal fluid (clear fluid inside the abdomen) did. Note to self, keep your peritoneal fluid in your tummy!.

Here are some general guidelines that can reduce your chances of being attacked by a shark while swimming in the ocean:

3.     Do not swim with open cuts or abrasions (or while menstruating, apparently).

4.     Do not wear shiny jewelry that can attract their attention.

6.     Do not think you are safe because you are in shallow water.

7.     Do not swim near piers or where people are fishing.

8.     Do not swim when there are a large number of shark’s prey around ie. schools of fish.

9.     Always swim with someone who is a slower swimmer than you.

Should all this fail and you are confronted by a shark the best advice is to fight back. Apparently, sharks tend to avoid prey which can hurt them. It is recommended that shark attack victims fight back by punching, hitting, kicking and head butting. Sharks eyes and gill slits are particularly sensitive so try poking them in the eyes and raking their gill slits. If you ever head butt a shark and poke him in the eye, then you can do anything!

Have fun at the beach!

–Female sharks have thicker skin then males as the males tend to bite them during mating.

-Shark teeth are covered with fluoride and replace themselves through out the sharks lifetime. Unfortunately for their victims they have excellent dental health. They have been known to have more then 30,000 teeth in their lifetime. Odds are you will never get attacked by a toothless shark.

-Some captive females have reproduced without mating with a male (Parthenogenesis).

-They do not have a single bone in their body. Their skeleton is made of cartilage.

-The first Tiger shark to hatch inside its mother’s womb eats all the other unborn pups.

-Sharks can smell a drop of blood in 1 million drops of water.

-Some sharks are fussy eaters. They take a bite or just sink their teeth into their prey. If they do not like the taste they spit it out and continue on.